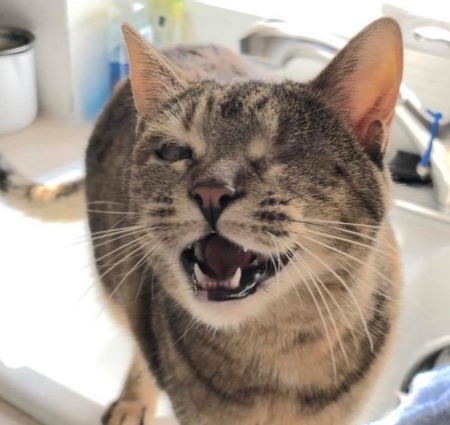 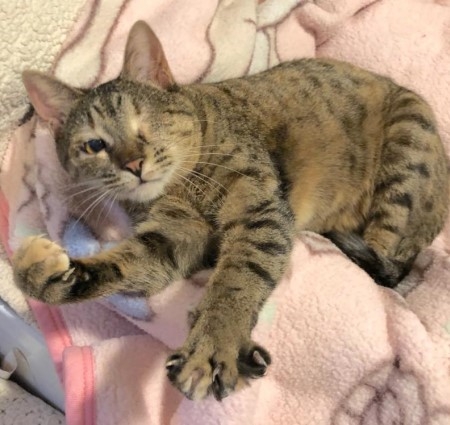 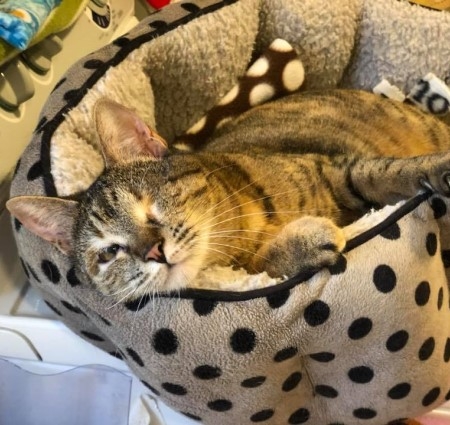 Brie and her sister Gouda, came to us from the Springdale, Arkansas shelter in 2016. Both girls were born without eyelids and needed eye drops every few hours. That's tough to do in a shelter environment. The shelter had just received 72 new cats from a hoarding situation, in addition to the endless number of kittens arriving daily. Hard decisions would have to be made if we could not accept these girls. Of course, we said yes.

They arrived at the sanctuary in July where they blossomed into rambunctious little kittens. Our vet evaluated their eyes and recommended an eye specialist in Oklahoma City to perform eyelid reconstruction surgery. Without this surgery, they would need eye drops for the rest of their lives multiple times a day. If they did not get them, they would develop painful corneal ulcers and ultimately go completely blind. We had to make these surgeries happen so they could blink.

Their surgeries were scheduled for October. In the meantime, they were both spayed and we rushed to raise the funds needed for their operations. Their surgeries went well. Brie had one underdeveloped eyeball, which the vet removed. He stitched up the eye socket to prevent infection. Her good eye received a new eyelid, which healed and now functions perfectly.

They are both so affectionate and sweet. Brie likes to reach out to you with her right paw, like she's stretching, but really she is asking for you to get closer so she can ride on your shoulder or around your neck like a furry scarf. Both Brie and Gouda are hilarious and entertain us every day!

Watch a video of Brie.