Forever in our Hearts Memorials
Date of Death:   Thursday, January 07, 2021 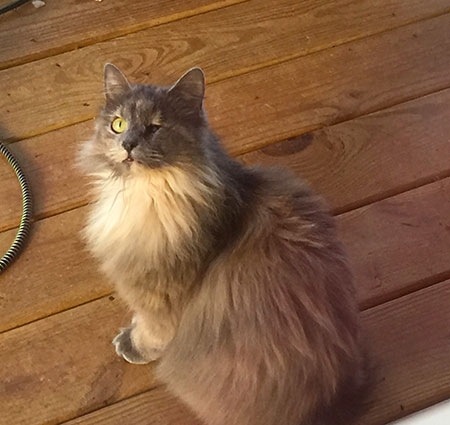 In May of 2016, a local Trap-Neuter-Return (TNR) group began a large colony trapping project at a low-income housing development in Fayetteville, Arkansas. A hoarder had been evicted several months prior and the local shelter, overwhelmed at the time, was unable to help. Over 20 cats were simply released from a two bedroom apartment and left to fend on their own.

When the call came in to the TNR group to help, over 30 cats were initially identified. Many of the cats were found to be friendly, and never returned to the property where they were trapped. Instead, they were fully vetted and placed into loving, adoptive homes.

In June of 2016, Cupcake showed up at the new caretaker's apartment. She was emaciated and quite fearful, but quickly made it known that she was not feral. Once her caretaker assessed her, she realized she was missing one eye and knew she would have a difficult time living on the streets. She contacted the original TNR group asking for assistance for this poor girl. By that time, she was plaintively 'mewing' for attention, even going so far as to rub in and out of her caretaker's legs.

The text messages, emails, and phone calls flew from rescues to shelters. She eventually arrived here at the Sanctuary where we could give her all the love and patience to help her come out of her shell. She became a thriving little beauty and made many cat friends, especially with Jack and Sushi, her big adopted brothers.

Unfortunately, Cupcake developed stomatitis in 2020 which is an extremely painful oral condition in cats. Despite medications and the removal of teeth, her mouth remained extremely painful and it became difficult for her to eat or be comfortable. The difficult decision was made to say goodbye to sweet Cupcake because her quality of life had diminished significantly. We miss this beautiful girl so much...soar high sweet Cupcake...you will remain in our hearts forever.

Thank you Jody Atkins for loving and sponsoring Cupcake